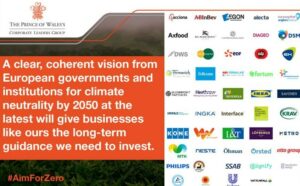 On the eve of the Future of Europe Summit, CEOs from more than 50 businesses, investors and business networks, including Unilever, IKEA, LeasePlan, FrieslandCampina, Aegon and DSM, are calling on the EU to endorse a long-term decarbonisation strategy to achieve climate neutrality by 2050.

In an open letter, leading European businesses, investors and business networks are urging heads of state to put climate change at the top of the EU agenda in order to provide businesses with the confidence needed to invest in sustainable, net zero industries of the future and deliver on their positive economic forecast for a climate neutral transition.

The signatories come from both worldwide and national businesses, across industry sectors, including automotive, energy, retail, chemicals, steel, engineering, insurance, farming, and food and drink, representing more than 1.5m employees from across Europe, including the UK, France, Germany, Portugal, the Netherlands, Finland, Sweden, Spain and Denmark. The business and investment networks supporting this initiative bring together more than 16,000 climate progressive businesses.

The letter states: ‘Putting climate change at the top of Europe’s agenda will provide business with the clarity and confidence to invest in the sustainable, net zero emissions industries of the future, driving innovation and protecting European competitiveness on a global scale … Collectively, we have an urgent task: to decarbonise the global economy in little more than a generation.

‘Every year more of us are setting science-based targets for our companies’ emissions, we are purchasing clean energy and signing up to renewable energy commitments, using low emission and electric vehicles, converting land to carbon sinks and improving energy efficiency throughout our operations.

‘We are doing this because we see the threat that climate change poses to our businesses. The impacts of climate change are already affecting our bottom lines: degrading worker health and productivity, disrupting our operations and supply chains, and damaging assets … A clear, coherent vision from European governments and institutions for climate neutrality by 2050 at the latest will give businesses like ours the long-term guidance we need to invest.’

The signatories, members of The Prince of Wales’s Corporate Leaders Group (CLG), We Mean Business network, The Haga Initiative, the Finnish Climate Leadership Coalition and others acknowledge the urgency of the climate crisis, calling on the EU to lead the way towards decarbonisation of the global economy by 2050 at the latest.

“As EU heads of state and government discuss the future of Europe they will need to agree not just a political direction, but also an economic and environmental one. The European Commission’s ‘A Clean Planet for All’ document sets out a vision for a net zero economy that delivers a net economic benefit, including the development of new markets, business opportunities and jobs.

“Businesses from across the EU economy are standing up to make it plain that they know the only viable, sustainable business model is one that delivers sustainable prosperity and climate action. They are calling on Europe’s leaders to set out a swift timetable to deliver net zero by 2050 at the latest and to deliver the right policies to unlock business investment and innovation. The next five years will be decisive in establishing the investment, infrastructure and innovations needed for a climate neutral Europe and securing Europe’s competitive edge in the emerging global clean economy. We need to step up, now.”

The Future of Europe Summit in Sibiu, Romania, has been called by European Commission President Jean-Claude Juncker a “crucial moment” for the EU to grasp a world role as the US withdraws from the global arena.

“Businesses have a responsibility to take action that will help address climate change, and many of us are already doing so. But we need to accelerate progress. A European strategy to deliver Net Zero Emissions by 2050 is essential to signal the direction and speed of travel that is necessary to achieve the 1.5 degree ambition set out in the Paris Agreement.”

“We at Royal DSM are stepping up to transform and future-proof our business by taking bold climate actions. We would urge European governments to do the same by setting foundations for a faster low-carbon transition in Europe.”

“The time to act is now. For every part of society to contribute to the Paris Agreement, we need an EU-wide long-term strategy to reach climate neutrality by 2050. The IKEA commitment is to become climate positive by 2030, and we encourage EU Heads of State to implement a clear and coherent vision that enables us as a retailer, and other businesses, to contribute our part.”

Antti Herlin, Chairman of the Board, KONE Corporation

Michael Otto, Chairman of the Supervisory Board, Otto Group

Minna Arve, the Mayor of Turku