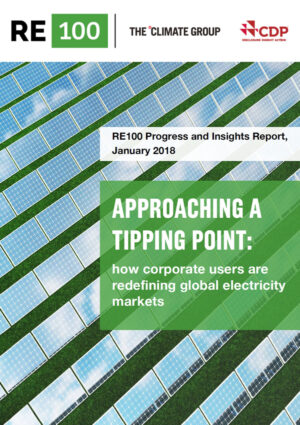 ‘Approaching the tipping point: how corporate users are redefining global electricity markets’, a new report from RE100 – a global corporate leadership initiative led by The Climate Group in partnership with CDP – tracks progress made in 2016-17 by companies committed to 100% renewable power.

The report also provides insight into emerging trends in corporate sourcing of renewables around the world, with 122 RE100 members operating in 122 countries averaging 1.3 times more renewables in their electricity mix than the global rate of renewable electricity use.

Thanks to falling costs of renewable energy technology, there is a notable shift away from renewable energy attribute certificates towards direct contracts with suppliers, as well as onsite generation and offsite grid-connected generators (power purchase agreements, or PPAs) – meaning that increasingly, members are directly growing renewable energy capacity.

SPECIFIC FINDINGS IN THE REPORT INCLUDE:

The report comes as government and business leaders gather at the World Economic Forum Annual Meeting in Davos, Switzerland, to discuss pathways to a sustainable economy, and a few days after Nike signed its second major wind contract, in Texas, US, that will take the company more than half way to reaching 100% renewable electricity globally as part of RE100.

Helen Clarkson, Chief Executive Officer, The Climate Group, said: “I’d like to congratulate every RE100 member accelerating the roll-out of renewable energy through their investment decisions. Their leadership is vital for overcoming policy challenges, shifting global markets, and inspiring many more companies to reap the economic benefits of renewable electricity. Rapidly growing demand from world-leading RE100 companies – and increasingly their suppliers and peers – means governments can confidently look to ratchet up targets in 2020 for slashing greenhouse emissions, to deliver on the Paris Agreement.”

Paul Simpson, Chief Executive Officer, CDP, said: “CDP data shows a jump in renewable energy procurement and that motivations are not only environmental but economic. With nearly 90% of companies driven by the economic case for renewables, this demonstrates a fast approaching tipping point in the transition to a zero-carbon economy.  These companies prove that energy is becoming a board level issue across the globe and sustainability is essential for future business security. Now, it’s time to tip the balance and make 100% renewable the new normal.”

Katharina Stenholm, Senior Vice President and Chief Cycles and Procurement Officer, Danone, said: “The transition to renewable electricity is a key lever to help Danone strengthen efficiency and achieve our commitment to being carbon neutral by 2050. Our first milestone will be to reach 50% of renewable electricity by 2020. We are therefore delighted to join the RE100 initiative. We look forward to working with other companies to show that green energy is good for the environment and good for business.”

Hatsun Agro Products Ltd, India’s largest private dairy, has committed to a 2032 target. Already sourcing over 80% of its global electricity consumption from renewable sources, the company aims to reach 100% by investing in solar and wind energy and converting diesel generators into lithium storage batteries for maximising its use of renewable power.

RG Chandramogan, Chairman and Managing Director, Hatsun Agro Products Ltd, said: “Our mission to leave the world in a better place for future generations is at the heart of our business strategy. That’s why we’ve joined the global RE100 campaign alongside other forward-thinking companies, in our commitment to source 100% renewable electricity – by 2032. Thanks to our investments in wind and solar power, we’re already more than 80% renewable. We hope that many other businesses follow suit.”

RE100 now brings together 122 global companies, with a collective revenue of over US$2.75 trillion and operations spanning six continents. Together they represent over 159TWh of demand for renewable electricity – more than enough to power Malaysia, New York State or Poland, and equivalent to the 24th largest electricity demand of all countries.