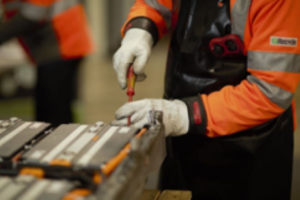 The uRecycle® company is going to build a new factory in the port of Rotterdam for both the recycling and re-use of batteries. This uRecycle® location will become the European hub for processing of industrial and portable batteries.

uRecycle® is one of the top-three battery recyclers in Europe. The company, which also has branches in Finland, Sweden and Great Britain, recently entered into an alliance in the Netherlands with Stichting Stibat Services (Stibat), the Dutch organisation responsible for collecting (portable) batteries.

uRecycle® also has contracts with similar collection organisations in North-Western Europe and with forklift manufacturers, and importers of cars and e-bikes, among others. As a result, the company has ensured a steady supply of batteries.

Fully-fledged hub for recycling and re-use

uRecycle® opted for Rotterdam because of its ‘strategically excellent location’, says CEO Henny van Dort. ‘We can grow here into a fully-fledged hub for recycling and re-use in Europe. The supply lines to Rotterdam are good. But that’s not all. A lot is going on here in the field of the energy transition and the circular economy. So, Rotterdam is a good match with what we have been doing for more than a decade. We also want to enter into new partnerships in the chain in Rotterdam.’

Stibat is enthusiastic about the partnership. Director Arie de Jong: ‘Until now, we have taken all the collected batteries to our sorting centre, which is not centrally located in the Netherlands. The fact that we are now also going to operate a sorting centre in Rotterdam is an enormous step forward in terms of logistics and sustainability. We are looking forward to working with uRecycle®.’

A battery contains substances that are valuable for re-use, but also substances that can harm the environment. uRecycle® has a process to separate them and process them safely. In addition to recycling, uRecycle® also focuses on the re-use of industrial batteries in particular. These consist primarily of batteries from electric cars. When they can no longer be used in electric cars, there are plenty of options for a second life in other applications.

Once old batteries have been sorted in line with their chemical composition, they are shredded. The shredded batteries then go through an extensive sieving and filtering process that leads to the creation of a product known as ‘black mass’. This contains a number of substances such as zinc, manganese oxides, cobalt, nickel and other metals that are valuable for use in new industrial applications.

uRecycle® expects to see significant growth in the processing and recycling of industrial batteries in the coming years, in particular as a result of the rise in the electrification of transport.

Allard Castelein, CEO of the Port of Rotterdam Authority, is pleased that uRecycle® has opted for Rotterdam. ‘We are working on bringing our port and industry in line with the Paris Climate Agreement. As well as focusing on efficiency, new infrastructure and the development of a new energy system, we also need to take steps now to establish circular production processes. That is why uRecycle® and Rotterdam are such a good match. And it shows that we are leading the way in this area.’

The new uRecycle® location is expected to start operating in the first half of 2020. The factory will employ some 40 new employees.