E-magy, a Dutch cleantech scale-up has developed a unique technology platform for nano porous silicon that significantly boosts the performance of next generation lithium-ion batteries for electric vehicles (EVs). E-magy is one of the first movers in this space and is one of the few players with a fully operational pilot line in place. From here, the next step is to ramp up production to industrial scale in order to meet the anticipated demand of EV battery producers and car manufacturers.

Casper Peeters, co-founder and CEO: “Silicon has various unique features which are all superior to graphite which is the current standard for EV batteries. That is about to change. Over the past 8 years we have worked on a unique silicon based nanostructure. With our partners TU Delft and Zentrum für Sonnenenergie- und Wasserstoff-Forschung we have extensively tested our solution against the highest automotive standards with regards to performance, stability and safety – among others. We have demonstrated that batteries with our nano-porous silicon work and that the energy density is much higher than possible with graphite. Following these successful tests, we have produced several batches of the material for the largest EV manufacturers in the world, allowing them to validate our technology for their specific battery and vehicle applications. As these customers confirm the good results we see in our own lab, now is the time to start ramping up our production to an industrial scale. In line with the European Green Deal strategy, there is strong interest from industry and policy makers to push the European battery industry forward. We are excited to play a role in making EVs more accessible to many more people through our low cost nano structured silicon while at the same time pushing EV battery performance to the next level. As such, we are proud to be able to contribute to the energy transition and reduction of CO2 emissions, and therefore a cleaner world for everyone.” 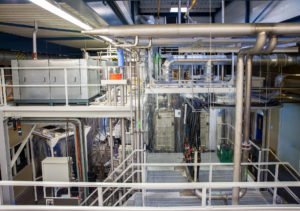 The core of the patented technology platform is a unique high throughput silicon alloy casting machine. This proprietary and efficient process for producing nano porous silicon will enable the 3rd generation of lithium-ion batteries used in for example EVs. E-magy processes silicon in a unique, cost-effective and scalable way to make ‘nano-sponge’ particles which are able to cope with the swelling during use of a lithium-ion battery. E-magy’s nano porous silicon improves the energy density and shortens the charge time of batteries allowing for an extended range, at lower costs and leading to more compact models than today’s high-end sedans. Silicon is also abundantly available and environmentally benign. Up to 10 kilogram of silicon is required per EV.

E-magy’s development and production focus is on next generation batteries for EV’s. Yet, the technology platform allows for expansion of the development and production scope to electric batteries used in various other devices such as e-bikes and scooters, drones (enabling short range transport), (miniaturisation of) computers and handheld devices, medical devices and big electric energy storage systems for balancing of (renewable) energy supply and demand, which makes the platform highly scalable.

Performance boost for next generation EVs

Next steps and additional funding

The current production site can produce up to 25 tons nano porous silicon per year. E-magy is now preparing the launch of an additional funding round for the construction of a new production facility in the Netherlands with a capacity of up to 3,000 tons which could serve the manufacturing of approximately 500.000 new electric vehicles annually.