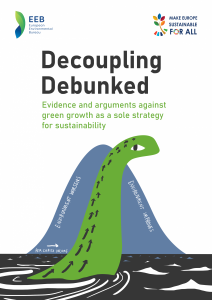 Is economic growth compatible with ecological sustainability? A new report shows that efforts to decouple economic growth from environmental harm, known as ‘green growth’, have not succeeded and are unlikely to succeed in their aim. ‘Decoupling debunked – Evidence and arguments against green growth as a sole strategy for sustainability’ is released yesterday, 9 July.

In recent years, the concept of green economic growth, i.e. the expansion of the economy without an accompanying increase in environmental harm, has gained political acceptance. However, this policy choice appears to be founded on little to no scientific basis.

The empirical data and theoretical literature is both overwhelmingly clear and sobering: there is no evidence supporting the existence of a decoupling of economic growth from environmental pressures on anywhere near the scale needed to deal with environmental breakdown. This is the conclusion of the new report ‘Decoupling debunked: Evidence and arguments against green growth as a sole strategy for sustainability’.

The authors also explain that there are at least seven reasons to be sceptical about the occurrence of sufficient decoupling in the future: rising energy expenditures, rebound effects, problem shifting, the underestimated impact of services, limited recycling potential, insufficient and inappropriate technological change, and cost shifting.

To be clear: the fact that decoupling on its own, i.e. without addressing the issue of economic growth, has not been and will not be sufficient to reduce environmental pressures to the required extent is not a reason to oppose decoupling (in the literal sense of separating the environmental pressures curve from the GDP curve) or the measures that achieve decoupling. Quite the contrary, without many such measures the situation would be far worse. In other words, decoupling shifts us from racing down the fast lane to cruising along the slow lane, which is an improvement. But to get off the highway, we need to do more.

The true cause for concern is the predominant focus among policy-makers on green growth as a panacea, with this focus being based on the flawed assumption that sufficient decoupling can be achieved through increased efficiency without limiting economic production and consumption.

Sustained growth is not sustainable

This scientific finding is strongly at odds with the eighth Sustainable Development Goal (SDG8), which aims to “promote sustained, inclusive and sustainable economic growth”. While almost all SDGs have very important goals and targets that humanity desperately needs to achieve, SDG8’s pursuit of the economic growth is undermining the possibly of achieving the others.

The question now is whether governments will be willing to act upon the best available scientific evidence when they review SDG8. Countries such as Finland have already reacted to this contradiction within the SDGs by downgrading the importance of GDP growth in their plan to achieve the SDGs, but the EU as a bloc has yet to admit that there is a problem with target 1 in SDG8.

Researchers have some ideas about the truly sustainable way forward. The main conclusion of ‘Decoupling debunked’ is that increasing efficiency only makes sense if it is part of a wider pursuit of sufficiency, which is the direct downscaling of economic production and consumption in those sectors where it is needed most. In the view of the authors and based on the best available scientific evidence, only sufficiency strategies respect the EU’s ‘precautionary principle’.

The report ‘Decoupling Debunked. Evidence and arguments against green growth as a sole strategy for sustainability’ was produced by the EEB, with the support of the German Alliance for Nature Conservation (Deutscher Naturschutzring), in the context of the EEB’s work on economic transition in the context of the Make Europe Sustainable for All (MESA) projec