An index released today by Transparency International, which marks its 25th anniversary this year, reveals some disturbing information – despite attempts to combat corruption around the world, the majority of countries are moving too slowly in their efforts. While stemming the tide against corruption takes time, in the last six years many countries have still made little to no progress. Even more alarming, further analysis of the index results indicates that countries with the lowest protections for press and non-governmental organisations (NGOs) also tend to have the worst rates of corruption.

The index, which ranks 180 countries and territories by their perceived levels of public sector corruption according to experts and businesspeople, uses a scale of zero to 100, where zero is highly corrupt and 100 is very clean. This year, the index found that more than two-thirds of countries score below 50, with an average score of 43. 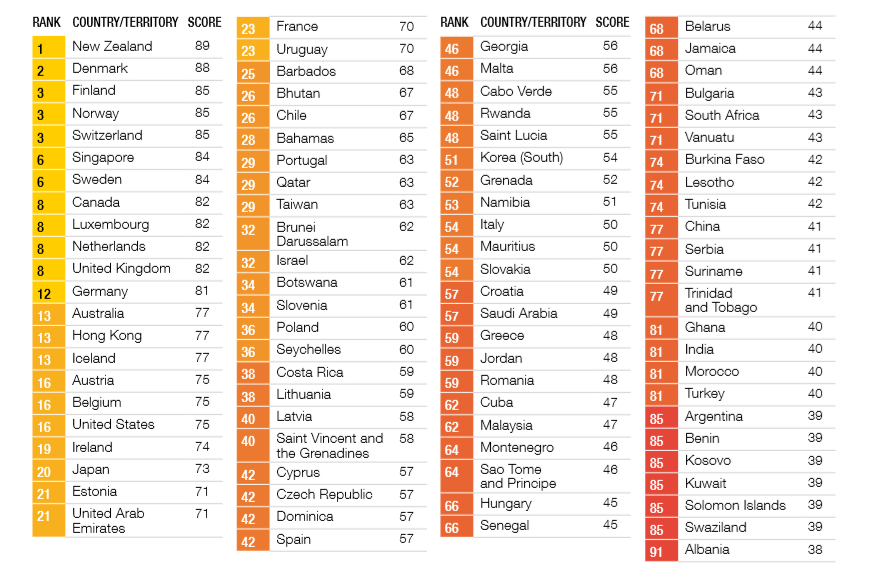 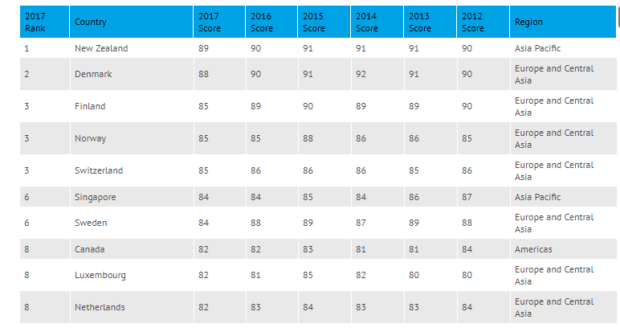 Every week a journalist is killed in a highly corrupt country

Analysis of the index results by Transparency International further examined the relationship between corruption levels, the protection of journalistic freedoms and engagement of civil society. It found that almost all journalists killed since 2012 were killed in corrupt countries.

“No activist or reporter should have to fear for their lives when speaking out against corruption,” said Patricia Moreira, managing director of Transparency International. “Given current crackdowns on both civil society and the media worldwide, we need to do more to protect those who speak up.”

The analysis, which incorporates data from the Committee to Protect Journalists, shows that in the last six years, more than 9 out of 10 journalists were killed in countries that score 45 or less on the Corruption Perceptions Index. This means that, on average, every week at least one journalist is killed in a country that is highly corrupt. In addition, one in five journalists that died were covering a story about corruption. Sadly, justice was never served in the majority of these cases.

The efforts of Transparency International and its first-hand experience working with more than 100 chapters worldwide confirm close linkages between corruption and freedom of the press. For example, in Brazil, which scored 37 on this year’s index, 20 journalists died in the last six years. Targeted for their investigations into local-government corruption and drug-related crime, among other issues, reporters in Brazil risk their lives everyday by simply doing their jobs.

Transparency International also looked at the relationship between corruption levels and the freedom with which civic organisations are able to operate and influence public policy. The analysis, which incorporates data from the World Justice Project, shows that most countries that score low for civil liberties also tend to score high for corruption.

“Smear campaigns, harassment, lawsuits and bureaucratic red tape are all tools used by certain governments in an effort to quiet those who drive anti-corruption efforts,” said Moreira. “We’re calling on those governments that hide behind restrictive laws to roll them back immediately and allow for greater civic participation.”

Hungary, which saw a ten-point decrease in the index over the last six years, moving from 55 in 2012 to 45 in 2017, is one of the most alarming examples of shrinking civil society space in Eastern Europe. If enacted, recent draft legislation in Hungary threatens to restrict NGOs and revoke their charitable status. This would have disastrous implications for many civil society groups already experiencing the constraining effects of a previous law that stigmatises NGOs based on their funding structures.

“CPI results correlate not only with the attacks on press freedom and the reduction of space for civil society organizations,” said Delia Ferreira Rubio, chair of Transparency International. “High levels of corruption also correlate with weak rule of law, lack of access to information, governmental control over social media and reduced citizens’ participation. In fact, what is at stake is the very essence of democracy and freedom.”