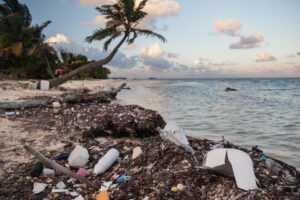 Bron
As you Sow

As You Sow is pleased to announce the launch of the Plastic Solutions Investor Alliance, an international coalition of investors that will engage publicly traded consumer goods companies on the threat posed by plastic waste and pollution. Twenty-five institutional investors from four countries with a combined $1 trillion of assets under management have signed a declaration citing plastic pollution as a clear corporate brand risk and pledging to interact with leading companies to find solutions through new corporate commitments, programs, and policies.

The group’s initial focus will be on plastic packaging. Twenty-five percent of plastic is made into packaging, making it the largest single use category of the material, and one where much negative impact has occurred. A significant amount of packaging is used for single use applications where materials are used briefly and then discarded. These materials can persist in the environment, partially degraded, for hundreds of years, causing well-documented damage to marine life, and could have a financial material impact by causing reputational damage.  For example, earlier this month, brand audits conducted by activist groups identified packaging waste from several large publicly traded international consumer brands as among the top sources of collected waste in countries with insufficient waste infrastructure.  Other material financial impact could result from new policy requirements for redesign of packaging and dramatically improved mitigation of post-consumer packaging waste.

Better scientific data released in the last three years indicating the problem is far worse than previously believed has led to a series of dramatic developments in recent months, elevating plastic pollution in the public consciousness, the media, and government.

We believe the influence of our community of socially and environmentally concerned investors can have a positive impact in this process due to our longstanding relationships with many companies.

While plastic has many beneficial uses, its production has grown exponentially for many years without sufficient regard to its environmental impacts.  Plastic production is projected to triple by 2050, yet only 14% of plastic packaging is now collected for recycling. Oceans already contain an estimated 150 million tons of degraded plastic, with four to 12 million tons added annually. Scientists predict oceans will contain more plastic than fish by 2050 if no actions are taken. Nearly 700 species have been affected, doing an estimated $13 billion damage to marine ecosystems, including losses incurred by fisheries, and costs to tourism and for beach clean-ups.

Also, nearly all plastic is derived from fossil fuels.  Plastic’s contribution to global warming is substantial with greenhouse gas emissions from the plastics sector expected to grow to 15% of the total global annual carbon budget by 2050.

Need to Assess Growth of Plastic Use

The inability to recycle or safely contain significant amounts of plastic packaging in landfills suggests that corporations and society need to carefully assess the continued growth of plastic use, especially for single use applications. If governments and industry cannot manage to recycle even one-fifth of plastic packaging, it is unclear how they can make sufficient progress to keep plastic out of rivers and oceans if production of plastic triples by 2050.

Our group will prioritize initial high-level engagement with four large international consumer goods companies: Nestle SA, PepsiCo, Procter & Gamble, and Unilever.  Companies that place plastic packaging on the market need to demonstrate awareness of these challenges and prioritize actions to resolve them. We will be engaging these companies and many others to:

And this whole Thing about Not Wanting to Confront the Rebecca issue Becuz Shubam Likes her...is a Bitch Move..If i was the SuperInfluencer i wuda got rid of Her..shiiidd Shubie Too #SorryNotSorry #PlayToWin #TheCircle #MVO

And Rebecca is a GUY ..So those Ppl who was scared to speak thier Doubts.. SHOULD HAVE! #TheCircle #MVO

thats Stupid!! at this Last Episode #TheCircle. How U Invite New Ppl onto the show, wen they didnt have enough time to show ThemSelves #MVO

This Stigmatism of how all Studs Look or Act alike Has to Stop. its Nothing against Young M.A., but Really *kevin harts Voice* #ShortStoryThread #MVO

¡AY DÍOS MÍOS ! My Supervisor said i Reminded her of #YoungMA .#Pause 😑🙄🧐 Bitch. Where? #MVO

i was lookin at mi Profile And Landscape Pic..& Gawd 😲 i was a Lil Sexy Thang 🤫 #LowKey #MVO

Finally got to Listen to #TheBreakfastClub on the Radio. Be wantin to Call in, but im always listenin to it on #Spotify #MVO