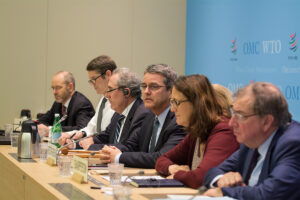 Ministers and senior officials from the 18 participants in the Environmental Goods Agreement (representing 46 WTO members) met in Geneva this weekend to work towards liberalising trade on a range of important environmental goods. Constructive talks were held and progress was made, but participants were not in a position to close the existing gaps at this point. The intensive discussions set the stage for further talks in the near future.

“Participants negotiated in good faith and made good progress towards an agreement. I believe that the knowledge and understanding gained in these discussions will help us to move forward in the near future. I urge participants to show whatever flexibility they can to help conclude the deal.

“This is not the usual kind of trade agreement as it is focused on protecting a common global good: the environment. The trading system should be in a position to make a positive and meaningful contribution towards tackling environmental degradation. I believe that all delegations involved in these discussions remain committed to this, and to building on recent achievements such as the Paris Agreement on Climate Change and the UN’s 2030 Sustainable Development Agenda.

“I would like to thank all delegations for their intensive work. I would also like to thank Michael Froman, US Trade Representative, and Cecilia Malmström, European Trade Commissioner, as co-chairs of the ministerial discussions this weekend, and Andrew Martin of Australia for his efforts as chair of the overall negotiating process.”

The 18 participants representing 46 WTO members account for most of the global trade in environmental goods. Since January 2014, they have been engaged in negotiations to slash duties on products used in a variety of environmentally-related functions including: generating clean and renewable energy; improving energy and resource efficiency; reducing air, water and soil pollution; managing solid and hazardous waste; noise abatement; and monitoring environmental quality.