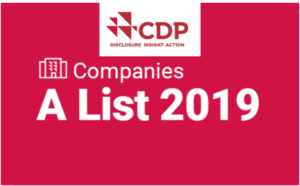 Major global brands including BT Group, Danone, Microsoft and Sony have been named among 179 companies on a prestigious ‘A List’ for their leadership on corporate transparency and action on climate change, released today by global non-profit CDP. The Dutch companies on this list are: ING, KPN, Philips, Royal BAM Group, Signify and Unilever.

Designed to harness the competitive spirit of business to raise ambition and spur action on tackling climate change, CDP scores thousands of companies which disclose environmental data through its platform each year at the request of their corporate customers and investors.

Data from STOXX has shown that the A List has outperformed its global benchmark by an average of 5.5% per annum over a 7-year period1. This indicates that transparency and leading action on climate change are correlated with financial success.

Out of over 8,000 companies scored on their 2019 disclosures, just the top 2% made the prestigious A List this year, including AstraZeneca, BT Group, CVS Health, Danone, H&M, Klabin, The LEGO Group, L’Oreal, Microsoft, Nestle, Ørsted, Sainsburys, Samsung Engineering, Sony, Unilever and Walmart. The Dutch companies on this list are: ING, KPN, Philips, Royal BAM Group, Signify and Unilever.

The A List companies are considered to be leaders because of their transparent and comprehensive disclosure of climate data, thorough awareness of climate risks, demonstration of strong governance and management of those risks, and demonstration of market-leading best practices. Examples of best practice could include setting science-based targets, shifting to renewable energy, investing in low-carbon product innovation, using internal carbon pricing or incentivizing suppliers to reduce their emissions.

The companies on the A List hail from 22 countries around the world. The countries with the headquarters of the most A List companies are Japan (38), the U.S. (35) and France (22). Regionally, Europe hosts the most A List companies by far, with nearly half of the global total (85 companies), followed by Asia (51) and North America (36). Only four companies headquartered in Oceana are on the list (all in Australia), and two in Latin America (Brazil) and one in Africa (South Africa).

Other key findings include:

The A List is released on the eve of the World Economic Forum’s annual meeting in Davos this week, which brings together leading lights from business, government and civil society. Top of the agenda this year is “How to mobilize business to respond to the risks of climate change”. The CDP A List shows which companies are taking this global challenge seriously and working to address the risks.

Dexter Galvin, Global Director of Corporations & Supply Chains at CDP, said: “Congratulations to the companies on the A List for blazing a trail for others to follow. Other companies should look to these leaders for inspiration and learn from them. The latest science says we need global emissions to urgently peak and start declining by 7.6% a year to avoid the worst impacts of the climate crisis. It’s clear that global business has a critical role to play in this existential challenge. Companies can and should become part of the solution rather than part of the problem. This also unlocks opportunities for fast-moving companies to get ahead, with the STOXX Climate Leaders Index showing that those on the CDP A List outperform their peers on the stock market by 5.5% per annum. Leading on climate action is good business in today’s economy – it will be essential business in tomorrow’s economy”.

CDP data shows investors and purchasers are calling for transparency and action from companies on how they are responding to climate change. In 2019, 525+ investors with US$96 trillion in assets and 125 major purchasers with US$3.6 trillion in procurement spend requested companies to disclose through CDP and 8,400 companies responded – a 20% increase on the previous year.

Gilles Cutaya, Deputy CEO at CPR Asset Management, commented: “At CPR Asset Management, we’re convinced that investing in climate leaders today is set to bring long-term value to our clients. We need to know how exposed a company is to environmental risks and their long-term strategy for the low carbon transition, in order to identify future market leaders. Thanks to their unique and longstanding leadership in the climate field, the highly respected CDP ratings are at the heart of our investment process.”

Lucas Joppa, Chief Environmental Officer at Microsoft said: “Microsoft is proud to be on the CDP Climate A List this year and for 7 years in a row. We believe that as a global technology company, we’re well-positioned to enable and accelerate the low-carbon transition. In the past year, we’ve accelerated on our path to powering our global operations with 100 percent renewable energy; taken steps to improve water efficiency across our operations; set a science based target in-line with a 1.5 degree scenario; and nearly doubled our internal carbon price to $15 per metric ton.”

Magdi Batato, Executive Vice President, Head of Operations, Nestlé S.A, said: “Nestlé is pleased to be on the CDP climate A List again this year. This pays tribute to our leadership in climate change which is one of the biggest threats we face as a society and which is a threat to the sustainability of our business. Last year, we announced that we will accelerate action to tackle climate change and committed to zero net emissions by 2050. We will continue to step up our efforts and we call on others to embark on this journey with us.”

Examples of leadership and innovation from the climate A List companies include:

Using a comprehensive, independent and transparent methodology, CDP scores thousands of companies from A to D- on an annual basis. Those that don’t disclose or provide insufficient information to be evaluated are marked with an F.