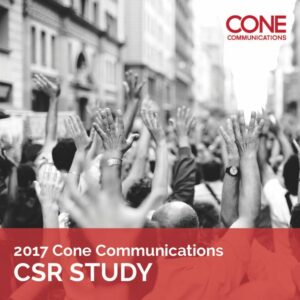 Seven-in-10 Americans believe companies have an obligation to take actions to improve issues that may not be relevant to everyday business operations, according to the 2017 Cone Communications CSR Study. The study, with benchmark data dating back to 1993, examines not only the consumer attitudes, perceptions and behaviors around corporate social responsibility (CSR), but also if and how companies should stand up for social injustices. The research revealed consumers factor a company’s core beliefs into shopping decisions. Eighty-seven percent said they’d purchase a product because that company advocated for an issue they cared about, and more than three-quarters (76%) would refuse to purchase a product if they found out a company supported an issue contrary to their beliefs.

Still, Americans are hopeful companies will take the reins in the near future. Eight-in-10 (79%) expect businesses to continue improving their CSR efforts and nearly two-thirds (63%) believe business will take the lead to propel social and environmental change moving forward.

“The events over the past year have ignited a groundswell of activism on very divisive topics and Americans are questioning future progress. They are looking to companies to drive change on the issues they hold dear,” says Alison DaSilva, executive vice president, CSR Strategy, Cone Communications. “Now, consumers are no longer just asking, ‘What do you stand for,’ but also, ‘What do you stand up for?’”

Consistent over the years, nearly nine-in-10 Americans (86%) expect companies to do more than make a profit, but also address social and environmental issues. However, their definition of what it takes to be a responsible company has become more all-encompassing. Americans prioritize a number of different business actions as important:

When asked the most important responsible business practice, Americans felt being a good employer was the top priority (35%) – showing that consumers want to do business with companies that, first and foremost, do good for their own people.

“Being a good employer has always served companies well in terms of recruitment and retention, now those practices can also yield broader positive business benefits,” says DaSilva. “Companies should now showcase their internal efforts to enhance their reputation and gain crucial points in the eyes of consumers.”

ECONOMIC DEVELOPMENT LEADS AS TOP ISSUE FOR COMPANIES TO ADDRESS

Americans have also resoundingly prioritized economic development (34%) as the top issue for companies to address, consistent since 2011. A topic that was widely covered in the 2016 U.S. presidential election, economic development is a macro issue that is inclusive of a variety of difficulties impacting communities across the globe. Other important areas include:

Beyond the overarching issues, consumers expect companies to get involved in many of today’s hot-button matters. When asked about topics that are active in the news, job development topped the list (94%), continuing the theme of economic development. However, consumers also felt companies had a role to play in other social justice concerns facing the United States today, including racial equality (87%) and women’s rights (84%). Other issues Americans want companies to address include:

And companies’ actions around these matters are factoring into consumers’ decision-making. Nearly three-quarters (73%) said they would stop purchasing a product from a company that shared a different perspective on one of these polarizing issues.

“Simply addressing issues within the business footprint is no longer going to cut it in the eyes of consumers,” says Whitney Dailey, Director, Marketing/Research & Insights, Cone Communications. “Today’s consumers expect companies to have a voice on oftentimes divisive issues, and they’re willing to boycott if a company’s core beliefs does not align with their own.”

Nearly 25 years of benchmark data reveals CSR continues to be a differentiator in the minds of Americans – impacting consumers’ likelihood to switch brands as well as their positive perception of the company. Nearly nine-in-10 Americans (89%) would switch brands to one that is associated with a good cause, given similar price and quality, compared with 66 percent in 1993. And whenever possible, a majority (79%) continue to seek out products that are socially or environmentally responsible.

The research demonstrates that CSR is a growing and powerful strategy to build brand reputation, loyalty and affinity. Increasing over time, respondents have a more positive image (92% vs. 85% in 1993), are more likely to trust (87% vs. 66% in 1998) and are more loyal (88%) to companies that support social and environmental issues.

“Consumer sentiment has grown significantly over the last two decades, showing an unwavering conviction to do business with companies that care,” says Dailey. “CSR is not a fad, a trend or nice-to-have. It’s a business imperative that must be authentic and seamlessly integrated into the brand value proposition.”

AMERICANS FIND STRENGTH IN THE POWER OF THE WALLET

When it comes to intended and reported actions, Americans see the power of their own dollar to make change. Remaining consistent over the past six years, consumers continue to reward and punish companies based on CSR efforts. The chief actions Americans say they will take remain to boycott for irresponsible business actions (88%) and buy a product with a social or environmental benefit (87%). A majority of the other top intended actions are also tied to the wallet:

Americans are following up on that intent with their dollars. The top reported actions taken over the past 12 months include making a donation (70%), purchasing a product with a benefit (55%) and buying a product because that company stood up for an issue they cared about (52%). Still, consumers are not only using their buying power to reward companies, but also to punish. One-in-every-two said they have boycotted a company for irresponsible business actions (50%) or because that company supported an issue contrary to their beliefs (46%) in the last year.

MANDATE TO COMMUNICATE IS REAL AND URGENT

Companies that are not communicating around their CSR initiatives stand to lose out in the eyes of consumers. In fact, nearly three-quarters (74%) of respondents stated they do not believe companies are striving to be as responsible as possible until they hear information about positive efforts. And companies that make commitments are being held accountable to produce results (82%).

Still, companies need not wait be flawless to share efforts. Remaining consistent over the past six years, nine-in-10 Americans (91%) say it’s okay if a company is not perfect, as long as it is honest about efforts. To further gain credibility in the eyes of consumers, companies should look to take a multifaceted approach to communications. Seventy-nine percent of consumers say they are more likely to believe a company’s CSR commitments if they share their efforts along multiple channels.

“Consumers have spoken – their expectations of companies are high and CSR is a critical factor in decision-making,” says DaSilva. “For companies to gain attention and realize bottom-line benefits, they need to authentically build CSR into the brand experience – this means going beyond a CSR report, an ad campaign or page on the corporate website.”